The Biggest Shark in the Reinvention Pond: The Commercial Club of Chicago

PEARL
Posted by City Colleges of Chicago Reinvention: The Truth at 7:51 PM 1 comment:

On September 15th, Harold Washington College's (HWC) faculty, staff, students and their communities got together to have a frank discussion about the harmful effects of the Reinvention. They named their forum  the HWC Community Roundtable on Reinvention. Even though the meeting was exclusively co-sponsored by the unions representing the faculty and professional, clerical and technical workers of the college and by the college's faculty council they could not hold their event at the facilities of the college. The organizers of the forum were forced to hold it at the Chicago Temple, several blocks away from the college, because the CCC administration cancelled their room reservation in a crass act of censorship. Fortunately, Labor Beat recorded the event and produced an edited version. We reproduce below Labor Beat's announcement and link to their video.

The controversy surrounding the city-wide so-called Reinvention plan for City Colleges of Chicago continues and grows. On Sept. 15, 2011 a meeting was planned to take place at Harold Washington College (part of the CCC system), sponsored by the AFT Local 1600 chapter at HWC. The administration at HWC blocked this by claiming that, since the student's families and community were invited, it was not a sanctioned CCC event, and demanded a $500 vendor fee. The meeting was moved to another location in the Loop -- the Chicago Temple. The meeting that took place yielded a rich discussion and clarification of the concerns facing faculty, staff, and students that the Reinvention scheme will end the school's traditions as a portal to higher education for low-income and minority students, dismantle faculty and staff rights and income, and deepen cuts in the name of the business model. The meeting was edited down to 27 min. for Labor Beat. 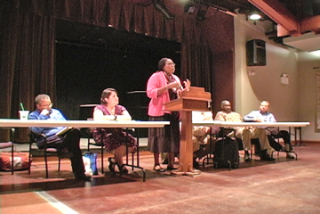 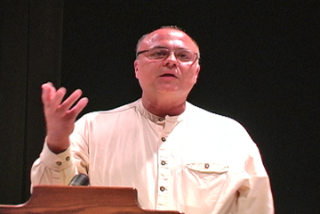 About Labor Beat and how you can help:
http://www.laborbeat.org/3/aboutlaborbeat.pdf

To order this dvd from Labor Beat (Committee for Labor Access):
BUY DVD - CLICK HERE
(Put title of DVD, "HWC Community Roundtable on Reinvention" in Description box. Put $15 in Unit Price box. $20 for Canada, and $25 for other countries outside the U.S. NTSC format only.)
Posted by City Colleges of Chicago Reinvention: The Truth at 9:40 AM No comments:

City Colleges of Chicago Reinvention: The Truth
You can reach us at pearls.wisdom.ccc@gmail.com