The link between Duncan and the Chicago City Colleges Grows

The Save the City Colleges of Chicago blog has reported:

Word is Mayor-elect Rahm Emanuel has spoken with Giannoulias about chairmanship of the Chicago City Colleges board and Gov. Quinn has chatted with Giannoulias about heading the Illinois Community College board. (Giannoulias, who was a major supporter of community colleges, is also a close friend and hoop shooting buddy of U.S. Education czar Arne Duncan.) Stay tuned."
If Giannoulias, Duncan's buddy, is appointed Chair of the Board of the CCC, then the direct link between the White House through its Department of Education is cemented. On a weekly basis, the possibility grows of the CCC being turned into Obama's poster child for his student-tracking plan to misguide students into job-training credentials disguised as higher education degrees.
PEARLE
Posted by City Colleges of Chicago Reinvention: The Truth at 8:23 AM 2 comments:

The Onslaught on the Community of Chicago’s City Colleges

Summary
The upper echelons of the bureaucracy that runs the City Colleges of Chicago (CCC) are in the midst of a drastic transformation of the historical mission of the CCC. This mission, like that of most community colleges across the U.S., has been to provide a path for millions of working class, poor or immigrant students to access a university education which offers personal intellectual enrichment that has long been recognized as one of the important foundations of democracy as well as professional advancement. Behind the façade of Reinvention the CCC hierarchy is moving away from these goals and instead narrowing the mission of the CCC to that of job training centers. In service to the Obama administration’s initiative to track students into associate degrees and certificates as their terminal degrees, they have invented the Reinvention. Corporate Chicago is steering this process under the guise of pro bono consultants and advisory councils. The result is the full adoption of the business model for the administrative structure of the CCC.  This has also allowed for the merging of political and business cronyism bloating the CCC headquarters with business positions, heaping on more than $5 million in additional annual salaries in the first nine months alone. This has all occurred since Cheryl Hyman, a businesswoman lacking prior educational leadership experience, was anointed chancellor. The impact on students, faculty and staff have begun with the loss of jobs, the reduction or elimination of services and the smothering of academic freedom.  The specifics of the Reinvention indicate that these attacks are just the beginning. Students and faculty have begun to air frustration, resentment, and opposition to the abuses of the Reinvention. An organized opposition to the masters of Reinvention is required in order to secure quality education, decent working conditions, and bright futures for all of those who work and study at the CCC.
The Train Has Arrived:
Anatomy of a Foretold Onslaught on the Community of Chicago’s City Colleges
In the game of basketball there is a term known as a telegraphed pass. That is when a player makes it obvious enough in which direction he/she is going to pass the ball that the players on the opposing team are able to anticipate the move and proceed to easily intercept the pass. The administration of the City Colleges of Chicago for quite a while has been telegraphing its intentions regarding the drastic and harmful transformations that it has already begun to impose on the CCC community. The truth is that the CCC has been telegraphing its intentions for quite a while, long before its infamous Reinvention campaign. But it is through its Reinvention mystique that it has finally found a vehicle to consummate its plans. And unfortunately most of us in the CCC community (or as the administrators would like to designate, in the preferred business jargon of the times, the stakeholders: students, faculty and staff) are either unaware of the Reinvention itself or caught off guard regarding the real motivations and disastrous consequences for the CCC community of this particular brand of Reinvention.
SELLING THE REINVENTION
Huh? For an institution, public or private, to suddenly go on a mass media campaign to spotlight its alleged warts and deficiencies seems unprecedented. Either the folks running this institution have illusions that the Pope will beatify them for their dramatic mea culpas, or there is a grand scheme behind the boisterous confessions intended to make unassailable the decisions and actions taken by these folks in their crusade to “rectify” their institution’s alleged failures. The worse the warts look, the better, for anyone questioning the “rectification” process can be denounced as uncaring and an impediment to progress.
This is the skeptical light in which we should look at the CCC’s justifications for their Reinvention campaign. Thus it is with solemn excitement that they inform the world in their Reinvention brochure (see http://reinventingccc.org/reinvention/) things like:
1. CCC enrollment has declined almost 30% between 1998 and 2008
2. 16% of students transfer to a four-year institution; only 4-5% earn their bachelor degree.
3. We lose 54% of degree-seeking students before completion of their first 15 cred hours.
4. Only 35% of Adult Education students meet their stated goals annually, and only 14 of students who state that they want to obtain a GED actually do so.

1. hold joint press conferences and submit joint press releases exposing the true nature of the Reinvention, and denouncing all the abuses and improprieties of the administration
2. hold public meetings at every City College in which both the students, their communities, the faculty and the staff can come together to learn more about the truth of the Reinvention, and to discuss how to oppose it.

The train has already arrived and it has already caused plenty of casualties. The worst is still to come. Yet, we still have time to derail the train. The big question is, are we up to this task?
by PEARL (Publicly Exposing the Arsenal of Reinvention Lies)
3/18/11 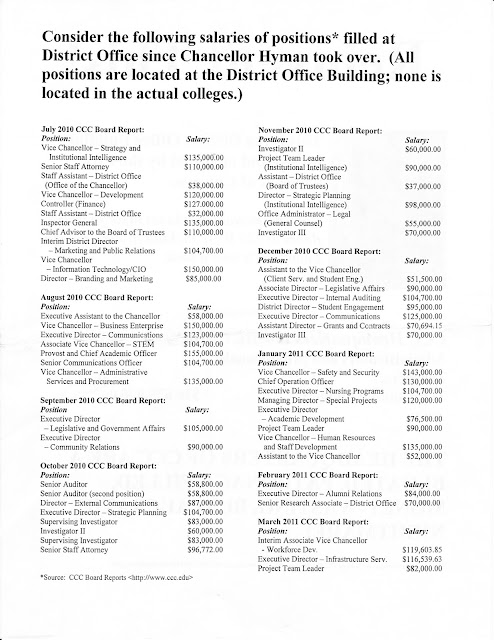 Posted by City Colleges of Chicago Reinvention: The Truth at 10:17 PM 2 comments:

City Colleges of Chicago Reinvention: The Truth
You can reach us at pearls.wisdom.ccc@gmail.com